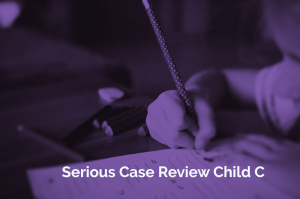 On 1 May 2019, Child C, a 15 year old male, died as a result of being stabbed whilst in the street. Child C had been permanently excluded from school and three months before his death, he had been seriously injured in another  stabbing incident.  There had been a noticeable increase in police contacts and concerns about deteriorating behaviour and escalating risk.  Child C was going missing and local intelligence suggested he was being criminally exploited and possibly involved in county lines.

On 19 December 2019, a 15-year-old boy was found guilty of his murder at the Old Bailey. A 16-year-old boy and an 18-year-old male were both convicted of manslaughter. A fourth suspect, a boy aged 16, died in custody prior to trial after becoming unwell.